One day, I was browsing Craigslist and I found something interesting. This is an AT&T Unix PC. From 1985, this is the oldest computer I own. It's older than I am (I was born in 1988).

I met a woman who told me the story of this machine. She told me it was her husband's - purchased from the RIT store in 1987 - and that it was never opened.

This is the story of unboxing and setting up a machine using 5.25" floppy disks and exploring Unix (and even DOS) from the 80's. 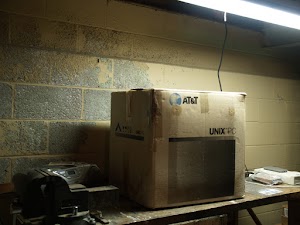 When I got to the house, the computer and its boxes were set up on a table in the garage. There were multiple boxes. The computer itself, the "System Software" - version 3.51, a box of Unix System V utilities, and the most fascinating (to me) thing - a DOS-73 coprocessor. There were also 2 boxes of random sticks of RAM, hard drives and various expansion cards but none of them were for this PC.

The woman told me that her husband had attended the University of Rochester (U of R) in the 80's and was studying computer science and meteorology. He wanted to study the weather and then create software to graph patterns and possibly improve predictions.

As previously mentioned, this computer and its accessories were never opened. The box was still taped shut. The machine had never been powered on.

The woman was selling it because her husband had passed away a few years ago, so she was going through his stuff and trying to decide what to do with it. She didn't want - or even know much about - this machine, but she knew it should go to a good home and not into the trash. The price listed on Craigslist was a little high, but done so to attract serious buyers only - those who could appreciate the machine. I told her about my interest in restoring old computers and told her I wanted this machine to use it and to learn about it. I decided to just give her the price she was asking and took the machine and its many boxes home. 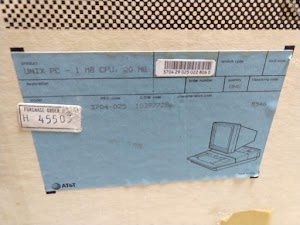 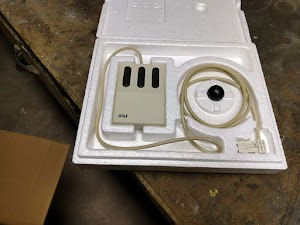 I cut open the tape on the main box to reveal the computer nicely packed in its original styrofoam. The keyboard and cable were in one box and the mouse – which I needed to "assemble" - was in another. Also included were dust covers for both the main unit and the keyboard. 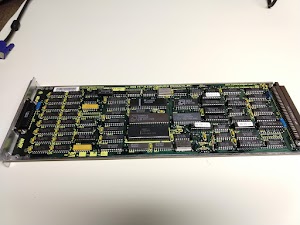 Underneath these ports are 3 expansion slots. Such expansion cards may be more RAM or even an Ethernet card! The only expansion card I have is the DOS-73 coprocessor – which is an 8086 CPU with its own RAM – used to run MS-DOS on this system. 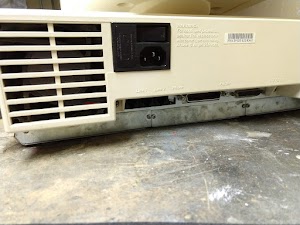 Inside the 5.25" floppy drive was a protective cardboard sheet. This is to prevent the heads from moving around while the machine is moved. The hard drive's heads also are "parked" during transportation. Usually these machines would come with a program that you could run to park the hard drive and floppy disk heads so that you could safely move the machine.

I wanted to power the machine up, but first I wanted to check inside. It's never been used, and was made before the "capacitor plague", but I still wanted to look. Before taking it apart, I decided to open up the manuals to see if disassembly/service instructions were included. 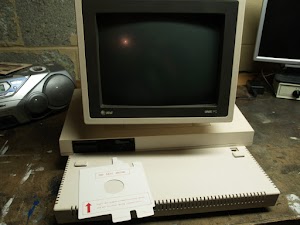 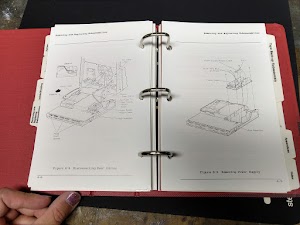 As is common with older computers it seems, besides just an operating manual, there was also a service manual describing exactly how to take this machine apart. With 2 screws in the back and 2 in the front (under plastic covers), the top flips open. Well, apparently there were also some plastic clips to pop open, but then it pops open. The top contains the screen obviously, so it's a little heavy and you need to be careful and gently place the top/screen on the table.

Once the lid is opened, you can see the floppy drive, hard drive and power supply neatly laid out. Now to unplug everything and take out the power supply. Make sure to remember where everything goes, and keep all the screws separate, like the one for the ground wire. Visually, the power supply looks fine, no bulging/leaking capacitors. 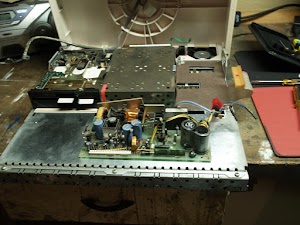 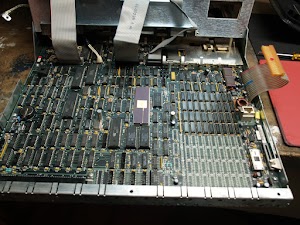 Now, you can flip open the metal frame to reveal the motherboard and the drive cables. Having never been used, the board looks very clean. Having a look over the board, you can see the CPU – the Motorola 68010 – and the built-in RAM chips. Luckily, the BIOS battery – what seems to be a "normal" 2032 – looked fine. I can try it out and replace it with a new one, if needed. I replaced the BIOS battery, a 2032, with a fresh one. The old one may still work, but just in case, let's replace it. 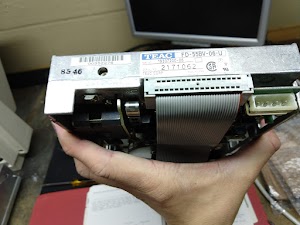 Now to continue taking this apart, as much as I can. Pulling out the drive cables, you can unscrew them and remove the drives and even the entire metal frame. The 20MB hard drive and the 5.25" floppy drive look to be in perfect condition. 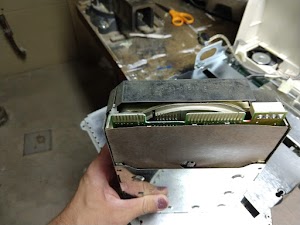 So, it looks like everything is fine. I even checked the fuse, and I think this machine is ready to power up. Guess I need to put everything back together now. Make sure I put all the screws in the right spot, plug all the cables back in and get the case put back on. So, let's plug this back in and see what happens… [to be continued] 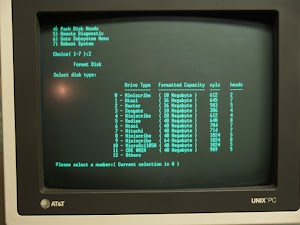